CFC® stands for CAN Frequency Control, a procedure for state-of-the-art trailer control and monitoring in vehicles with CAN data bus (Controller Area Network). The CAN data bus is the Backbone of the electronic network in the modern automobile.

With the new sophisticated safety systems being used in current vehicles, vehicle manufacturers had to look for new ways in which these systems could communicate with each other. "CAN bus systems" are a widely used solution to this problem today and are now very common in current vehicles - in contrast to the analogue solutions that were previously used. But what are the differences and what are the advantages of the CAN bus system?

What is the CAN bus system? 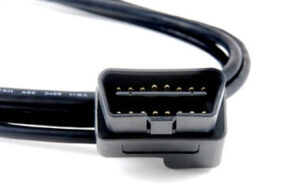 CAN stands for Controller Area Network and is a serial bus system.

It was developed by Bosch in the late 1980s to reduce the number of wiring harnesses in vehicles and to enable more effective networking of control units. The use of CAN bus technology thus allows vehicle manufacturers to reduce costs by saving weight compared to the methods used until then.

While the technologies used in the past often required several meters of cable in conjunction with various switches, relays and fuses, the CAN bus communicates via a single cable harness. In combination with the possibility of fault diagnosis and handling as well as high transfer rates, this makes CAN bus technology an ideal solution for the communication of control units in vehicles.

How does the CAN bus system work?

The idea behind the CAN bus system is simple. Instead of connecting all ECUs to a central control unit with a separate cable harness, there is a common cable harness that connects all ECUs with each other, so that each ECU is responsible for its own communication.

In the automotive sector, most vehicle functions are controlled by control units which act as nodes in the CAN bus system. All nodes connected via the CAN bus are able to communicate with each other via a line, often referred to as a data bus.

The nodes or groups of nodes occurring within the data bus can be addressed according to their function and not only according to their location, whereby communication within a bus system is always global. For example, the engine control unit can make the current engine speed available on the data bus and each control unit can decide for itself whether or not to use this information for itself. ECUs that need this information can read it directly from the bus without having to contact another ECU.

The CAN bus technology not only reduces the number of wiring harnesses used but is also extremely flexible. It is possible at any time for ECUs to appear as new nodes in the data bus or leave it. This applies not only to ECUs that are installed in the vehicle at the time the bus system is running or in the factory, but also to any retrofitted system without the need to lay new wiring harnesses.

Active driving safety systems inform the driver at all times about all relevant information exchanged via the data bus. Thanks to CAN bus technology, the control units no longer act in isolation, but all the necessary information is available to all participants at all times. Malfunctions such as a flasher failure can thus be detected very quickly and all bus participants are able to react very quickly to the new situation and take action.

In addition, new functions are being introduced into current vehicles, as this has been made extremely easy by the CAN bus system. One example is Trailer Stability Assist (TSA) as part of the Electronic Stability Program (ESP). This technology enables the vehicle to compensate for trailer skidding by applying targeted braking on the vehicle. This technology is available ex works on many new vehicles and is activated when trailer operation is detected.

For certain safety systems such as the TSA to function, it is essential that the electrical kit installed for trailer operation can communicate with the CAN bus. If this is not the case, some safety functions of the vehicle may not function properly! 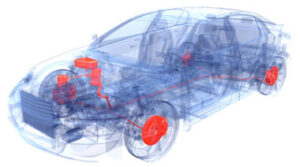 Over the years, new technologies are constantly being introduced into the automotive sector and vehicle manufacturers are always trying to set themselves apart from their competitors with new developments. Especially in the automotive sector, safety systems are a successful tool, as can be seen in the example of ABS from the 1980s.

ESP is a further development of ABS and TCS (Traction Control System). By braking individual wheels in a targeted manner, the system attempts to prevent the vehicle from skidding at the limit, thus giving the driver control of the vehicle. To enable ESP to react to critical driving situations, the system constantly compares the driver's wishes with the driving status. A number of sensors play an important role in ensuring that the system achieves the desired effect.

TSA is an extension of the ESP system and stabilises trailer operation. It is offered by some vehicle manufacturers such as Audi, Mercedes and Opel, but also by others. If the vehicle is in trailer mode, this function is activated and the TSA can prevent the trailer from swaying and skidding by braking individual wheels of the towing vehicle in a targeted manner. In the event of intervention by the TSA/ESP system, the driver is informed via the ESP light in the vehicle. For this to work, the vehicle must have a vehicle-specific electrical kit that can communicate via CAN bus to put the vehicle in trailer mode.

The CAN data bus is the backbone of the automotive network. More info >

Here you will find an overview of our trailer module types. More info >

You are looking for a type-specific
e-set or another product? More info >

Sale only in Switzerland